Keeping Up With Mt Washmore - Without a Dryer 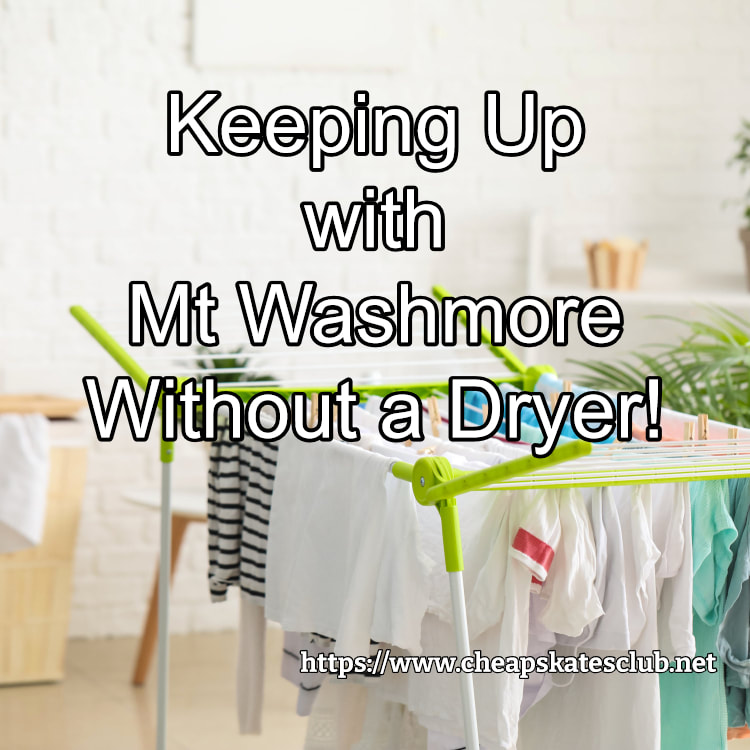 ​As we move into winter, and with La Nina sending us plenty of wet weather, getting the washing not only done, but dry as well can be a problem.

The easy solution is of course to just put each load through the clothes dryer. That's fine, if you have one. Or if you don't mind paying the excessive power bill; even the most power frugal dryers still use a lot of electricity.

I used to have a dryer. It made a very handy overflow pantry in the laundry. It would have been used perhaps a dozen times in all the years I had it to actually dry the clothes. This is mainly because I am a Cheapskate and I hate spending money on something when it's not strictly necessary.

Instead, the old fashioned, trusty, clotheshorse had worked just fine. Even with five people in the family, and all the laundry that entails (clothes, bedding, towels, tea towels and dishcloths) the clotheshorses let the wet washing dry, even on the wettest winter day.

How? Well for starters, I have a very simple laundry routine. It goes something like this:

Yes, I do between six and ten loads of laundry a week. As I said, there are five of us, plus four lots of bedding and five lots of towels.

Bedding and towels get done together.

For clothing, I use lingerie bags and everything goes in the one load, unless something is particularly nasty, then I usually soak and hand wash and toss it in with the next rinse/spin cycle.  Separating the colours, whites and darks with lingerie bags means they can go in the same load and not get fluffy and the colours don't run, bleed or grey. It also means that everything in the basket is done each day.

In summer everything gets dried on the clothesline, but in winter inside is easiest, fastest and most important for our budget, cheapest.

I have five clotheshorses. Now that may sound excessive, but there is one for each person in the house.

Four are in bedrooms, over the heater duct. It's simple then to just put each person's clothes, bedding and towel on their clotheshorse and let the heater do the drying. Or get them to put everything on the clotheshorse, even toddlers can do this.

The other one is next to the wood heater. I use this for heavy things like jeans, that need a little extra drying power, tea towels, dishcloths and any clothing overflow.

When I get up I put the washing machine on and run the cycle. When it's finished, the washing is put on the clotheshorses to dry. And dry it does, overnight, without fail. Next morning, while the machine is going through a cycle, the dry laundry is folded and put away. In our house everyone is responsible for emptying their clotheshorse and putting the dry laundry away.

It may sound complicated, and a lot of work, but it is faster than hanging outdoors in summer and no extra electricity is used, so no need for a dryer.

The secret is consistency, but then that's the secret to homemaking no matter what the chore. Keep up with the laundry and it doesn't build up and become overwhelming.

Even when I was working out of home, the routine was the same. It works. It's easy. It's simple. It's cheap. It's fast - I absolutely hate having to spend a whole day washing, hanging, folding and putting away laundry.

The clotheshorses are old. Well four of them are; they cost $5 each about 20 years ago and yes, they have had a couple of repairs over time, but they do the job. The other one is about seven years old and cost around $20.

Running a clothes dryer costs money, a lot of money when you consider that it needs to run for at least two hours a day to dry one load of laundry, and if you have a larger washing machine, then you'll need to run it longer with more loads.

Electricity costs are rising, but incomes aren't . Keep to a simple laundry routine and keep electricity costs down and Mt Washmore under control.
Copyright ©2001 - 2022 THE CHEAPSKATES CLUB, All Rights Reserved