ARE YOU READY FOR THE COMING FOOD SHORTAGE? 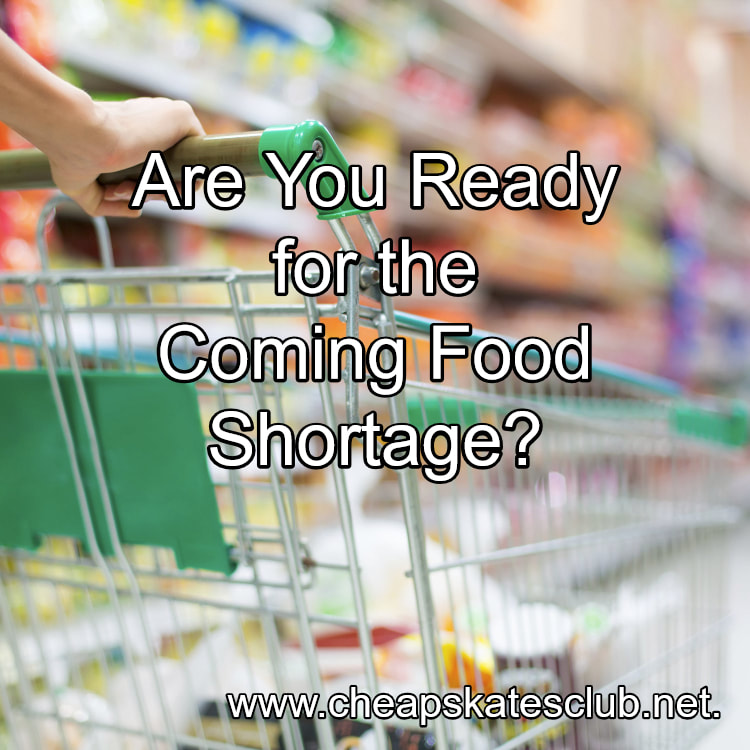 You may well, from the comfor of your chair, in a warm, cosy home or office or cafe, wonder if there really is going to be a food shortage.

The answer is yes, there is. And that's not me being sensationalist, or trying to scare you. It is simply commonsense to realise that with all that has hit Australia this year alone, food supplies will be short.

We've had bush fires.
We've had floods.
We've had a pandemic that has closed our borders.
Then there is the ongoing drought.
Avian bird flu has reappeared.
We were in recession.
Then our Prime Minister announced it was a depression, not a recession.
Unemployment is soaring.

All these things affect our ability as a nation to feed ourselves.

While both state and federal governments are telling us not to worry, there will be plenty, I'll 'fess up and say I don't trust them. Of course they're going to say there is plenty to go around - for a government to say anything else would be irresponsible and cause major panic, and we've seen what panic buying causes without a threat of food shortages.

Then last week local and national ABC news started reporting on crops being ploughed back into the ground - not because the harvest is so great, but because there are no pickers.

Then the closure of the largest meat processing plant in Australia at Dinmore was announced, supposedly for two weeks, but reports are coming through that it may be permanent.

JBS, the parent company of the Dinmore plant, also closed it's Brooklyn, Vic, plant at the same time for an indefinite time.

What happens if the largest meat processing plant in Australia closes? Meat could be in short supply until another plant picks up. How long will that take? Who knows.

Now the avian flu has caused the shutdown of a poultry farm near Geelong, and yet another near Bairnsdale.

This is just a few of the things that affect our food supply.

And quite frankly, all these things could be happening all the time, not just in 2020.

So, while Australia ranks 12th in the world for food security, we as individuals, need to ensure our own personal food security.

And the time to start is now.

I don't know how much more I can stress just how important it is to be able to feed yourself and your family in a crisis. Trust me, I know what it is like to have nothing but Weetbix and milk to feed your children. And we only had milk because we had friends on a dairy who kept us in milk free. You don't ever want to be in that position, and I will never, ever be in that position again.

Having enough food to give you three healthy meals a day for a week, without having to shop, is a start. Last time we talked about this I suggested keeping enough to last one pay period without shopping.

Now, with Stage 4 restrictions here in Melbourne, lasting for at least six weeks, I'd say every home should be able to last six weeks without shopping. Yes, we can go shopping. And yes, there is always delivery.

But those things don't ensure that the food is available when you want it.

I listened, almost in disbelief, as Daniel Andrews, the current Premier of Victoria, asked people not to panic buy. He said there was plenty of food, no need to rush out and buy, buy, buy. You might see some shortages, and you might not be able to get what you need or what you want, but there will be something for you to buy.

A warning though: only buy what you eat. If you don't eat pears, don't buy tinned pears. Buy peaches or apples or plums or apricots instead.  Same for the veggies. If you don’t eat green beans, don’t buy them. If you don't bake, then 50kg of flour won't help you. Buy what you eat.
I have been filling the gaps in the pantry over the last few months with tinned fruit, tinned veggies, some tinned soups (I only use tomato and cream of chicken as a rule) and tuna and salmon. I've been replacing the pasta and rice as it's used, and stocking up on a few instant noodle type packet meals. Not normally on my shopping list, but they are shelf stable and while not the healthiest if you eat them all the time, every now and then they work to stretch a meal.

Things like refried beans, black beans and coconut milk have also been replaced. I'm aiming to keep the pantry stable for now, instead of letting it run down like I normally do.
Since frozen veggies have been available again, I've been buying them and dehydrating them to make them shelf stable. Packets of peas/corn/carrots, green beans and corn kernels dehydrate and rehydrate very well, and we eat all these regularly.

Why am I focusing on dehydrating? It's easy to keep enough on the pantry shelf without taking up too much space, where packets of frozen veggies fill the freezer.

Another way we can guarantee our own food security is to grow it. Again, it's easy. Anyone can grow at least some of the food they eat, even if you live in an apartment in the city or a homestead in the desert. Honestly, when people tell me they can't grow anything I want to tell them they can't because they don't really want too.

This week on Landline it was reported that the price for fresh fruit and veg will rise by 60%. That's a huge increase folks. A sixty percent increase puts the cost of that $2/kg bunch of carrots at $3.20/kg.

Don't get me wrong, growing food is hard work. Farmers make a career out of it, so why anyone would think they don't need to put any effort into it astounds me.

You need to water, weed and fertilise. You need to keep an eye on the weather and watch the wind or hail or frost. You need to be able to keep pests at bay. You need to put some time and effort in to do these things, but if you do them regularly, then they only take a few minutes. In summer I spend around 15 minutes a day in the garden, in winter perhaps 15 minutes every second day. Its enough to keep the gardens producing and us fed.

I try to grow from seed. And I try to get heirloom varieties of seed. Heirloom varieties mean I can save seed from some of each crop to replant, and the plants will grow. Personally I like Diggers Club, Eden Seeds and Garden Harvest for my seeds. Just saying.

Oh, and when it comes to growing your own food, grow what you eat. Anything else is a waste of seed, water, time, and growing space.

We are looking to expand our veggie gardens this spring and summer. The less we need to rely on supermarkets, the better off we are, so growing as much as we can just makes sense. It boosts our food security.

A big garden isn't a problem for us. What we don't eat, we preserve, and plant accordingly so nothing is wasted.  My message here is: don't overplant - again it's a waste of seed, water, garden space, money and time. Plant what you can eat and preserve. If you believe you'll be able to barter or trade, then plant a little more.
Money - that five letter word! I am not, and would not, ever suggest you race out and buy up everything you need for the next week/fortnight/month/year. For starters, that's bordering on panic buying and that's when you make mistakes. It would also do some severe damage to most budgets.

Build up slowly, one or two things at a time. Look for specials, especially half-price sales, on the things you use. Try adding just one or two extra items a shop to build the pantry. But do it. Don't think you have plenty of time - you don't.
The time to act to ensure your own food security is now!

I think the next few years are going to be challenging for Australians. That's me being diplomatic - I really believe they are going to be hard; harder than anything I've lived through in my lifetime.

We've been living the good life for so long, there are generations of Australians who really don't understand true hardship. Even the GFC in 2007 - 2008 wasn't a crisis for us - we sailed through it compared to the rest of the world.

But this? No, this is going to bring us to our knees. It will be years before our country resembles anything close to what it did in March this year.

Right now, where you are, food may be plentiful. You may still have an income, so price increases, while they hurt, aren't crippling you like they are the tens of thousands who are out of work. It may even be affordable.

But building your ark, in the form of a pantry, can't hurt.