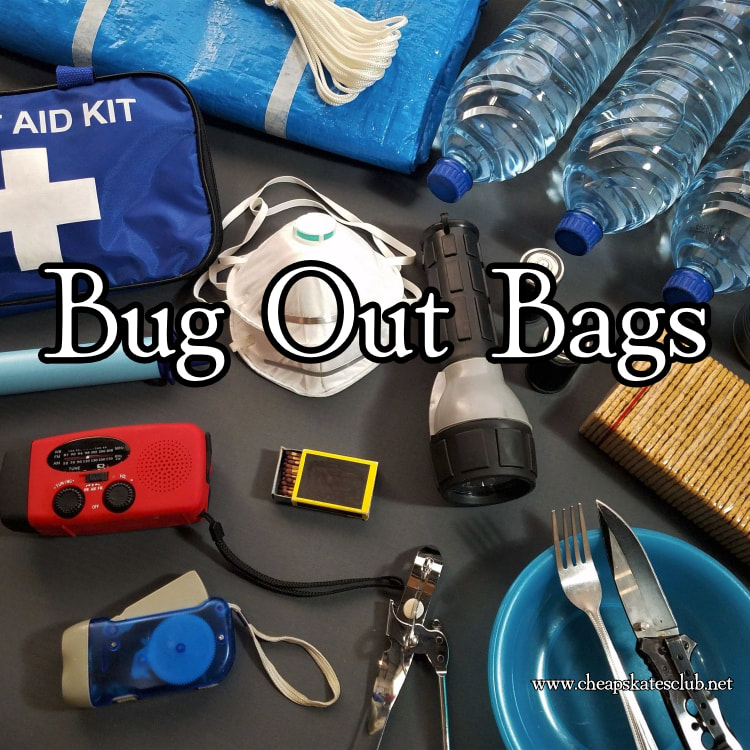 It's summer in Australia, and that means it is natural disaster season. We have more natural disasters in summer than we do during the colder months of the year. Bushfires, cyclones, floods, fierce summer storms all cause havoc and destroy property and infrastructure.

Just the last few days Western Australia has been hit with severe heatwaves and Far North Queensland has suffered through a cyclone and the following torrential rains that have caused widespread flooding. The town of Maryborough's CBD has been evacuated, the Bruce Highway, which is the main north-south highway for north Queensland is cut. Not only cut, but completely destroyed by the flood waters.

Then there were the grass fires in suburban Melbourne, when homes were evacuated as they came under threat. That lasted two days.

We might think that we are safe from natural disasters, but we just tend to have them at a different time of year to our northern hemisphere neighbours.

Bug out bags should be a part of our preparing.

I joke with Wayne and the friends we go four wheel driving and camping with that I can be packed and ready to back out of the driveway in 30 minutes if a trip comes up.

It's not really a joke though, I can be, because after every trip I restock and repack our bags and the camper, ready to go again. In the time it would take Wayne to hitch it up to one of the cars and plug everything in, I've pulled out the bags, emptied the fridge, closed and locked all the windows and the back door. Then everything is put in the car and the front door is shut and locked. And we can leave.

If you  are evacuating in an emergency - bushfire, flood, cyclone - turn the power off at the metre box: only do this if you are evacuating though, as it will turn off your fridge and freezer.

Australia has seen some horrible weather in the last 20 months, absolutely horrific. We've had extreme heatwaves causing mass blackouts, bush fires and a collapse of society as the communities involved suffer.  Then there were catastrophic floods. Western Australia had the worst bushfire summer in living memory. Then Melbourne was hit by a dreadful storm that took out power for weeks.  All this weather means that people have had to pack up and leave their homes, often with very little notice, and not knowing when, or even what, they will come back to.

So my question is if you had just 30 minutes notice to evacuate your home, and you didn't know when you'd be back, would you be able to pack the necessities, enough for at least three days (the timeframe that is standard before disaster relief *may* be available)?

Would you know what to pack?  Do you know how much water to pack for three days? Do you have shelf stable food that doesn't need to be cooked? Enough for everyone? Do you have a bug out bag for each of your pets?

In our personal bags we have:
Toiletry bag:Personal first aid kit:
In the "kitchen" box we have:
We carry our drivers license, Medicare card and ATM card with us. I have done a swap with a friend, and she has a box with copies of all our important documents  in it, and I have the same with their stuff. We also have everything copied to a USB and it lives in my personal bag. It has copies of birth certificates, bank account information, emergency contacts, important numbers we might need (tax file, passport, where our wills are, insurance information etc. etc. etc.) so we don't have to worry about picking anything like that up. We also have a little safe that stores copies of those things at home.

Right now we don't have pets, but when we did, I had a box with food for a week, food bowls, old towels and blankets and a box of kitty litter (we had two cats). It was the one time I splurged on pouches of cat food, because they're lighter and easier to carry than tins - but they were far to expensive to use all the time. It lived in the laundry cupboard and was easy to pick up and pack. We never had to use it to evacuate, but it came in handy when we were taking them to be cat-sat when we were away.

We also have wind-up torches and a wind-up radio so we don't need to rely on batteries. It has been suggested that everyone in a fire or cyclone zone should have a battery operated radio. That's fine, if you can get one - but then you need to keep on top of the batteries. If you're not using the radio, take them out or they may corrode and ruin the radio. That means you need to keep fresh, spare batteries handy to use all the time.

If you can find a wind-up radio I believe they are a much better option, simply because you don’t need to worry about batteries.

Solar powered radios are also available, but they were clunky and on the expensive side when I last checked a couple of years ago.  Ditto for the torches.

Do you have some water stored in jugs or bottles that you can grab? The rule of thumb we use is 5 litres per person per day at a minimum. This won't give you any to waste, but you'll have two litres for drinking, a litre for personal hygiene and two litres for cooking/washing up etc.  Disposable plates, cups and cutlery are handy, but take up space if you have to carry them. The advantage is that paper plates and bamboo cutlery can be burnt.

We have a camper, so we're covered for accommodation. But if you don't have a camper or caravan, do you have a tent that you can use? It doesn't have to be expensive, you just need to have one that is big enough to fit everyone, or two smaller tents, for protection. Even if you ended up in an evacuation centre, being able to put up a small tent will give you some privacy.

Do you have sleeping bags and mats or self-inflating mattresses? Blow up pillows are good to keep in your bug out bag, they don’t take up a lot of space but they sure make sleeping on the ground or a bench or sitting up more comfortable.

I hope and pray we never have to, and that you never have to evacuate either. But we live in Australia so the chances are fairly high that sometime we will need to pack up and go in a hurry. It's reassuring to know we are prepared, and that we can be gone in just a few minutes.

If you had to evacuate in a hurry would you have everything you need at hand, ready to pick up and run?

Take some time to think about having an evacuation plan, and putting a couple of bug out bags together, and keep them somewhere you can just pick them up and go, because in an emergency the sooner you can be out the door and on the way to safety, the better your chances are.

Remember: be prepared, not scared.
Copyright ©2001 - 2022 THE CHEAPSKATES CLUB, All Rights Reserved