Don't Be Afraid, Be Prepared! 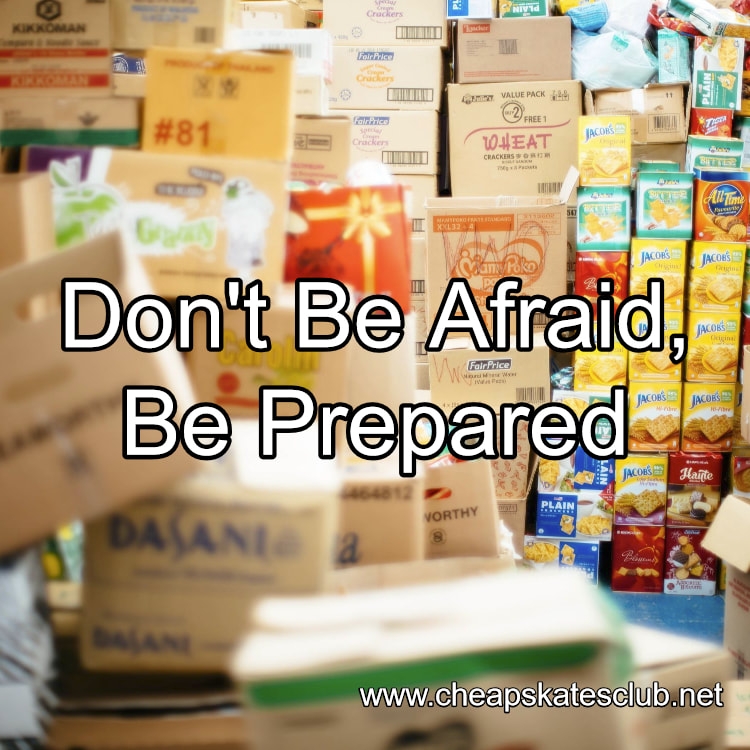 ​Stop worrying about the future, it's going to happen, and prepare for it so you're ready for whatever comes your way.

In the USA, September is preparedness month. Who'd a thunk there would officially be a month for being prepared?

I was pretty excited when I heard about this because you all know I am a preparer. I like to plan ahead, so that any surprises aren't disasters. And if a disaster is going to hit me, it's going to hit this year - 2020 has been one huge, world wide disaster.

But bring it down a notch or two, so that it relates to you and me.

There are so many disasters that can hit me and my family, and you and your family.

For us, the worst was sudden unemployment that lasted for over 4 years.

For so many Australians last summer it was bush fire.

Then came the flooding rains. On top of the drought and then the bush fires, rains were needed and welcome, but these rains made a horrible situation even worse.

2020 moves on a couple of months and we end up in the midst of a pandemic that created a whole bunch of disasters on it's own. Unemployment. Lockdown. Closed borders. Limited travel. Limited shopping. Rationed food and medicines. A recession. Schools closed for almost the whole year, and the list goes on.

So you need to be prepared, because even in Australia, an emergency or disaster of unforeseen proportions can happen. And it can happen to you.

You need to be prepared for whatever the world throws at you. But how do you plan for something that may or may not happen sometime in the future? And how do you do it without being afraid?

You start with one of my favourite activities: list making!

The first list is going to be a list of potential disasters you need to prepare for.

I also have floods, earthquake, unemployment, short term illness and long term illness on the list. And after living through the last six months I've added rioting and looting to my list. We haven't seen anything like what has been happening in the USA, but we have had so-called demonstrations turn violent. We have had a hoon or hoons, breaking curfew and driving his/hers/its/their noisy car around the streets all night long, followed by the police helicopter trying to trap them so they can be stopped. And this in our quiet, middle class suburb, where not much exciting really happens.  Violence breeds violence, and it spreads quickly throughout communities. So rioting is on my disaster list.

Then each disaster list has a list of things that could happen before, during and after the actual disaster. It could be blackouts, interruptions to water supply (which happened for a lot of Melbourne in September, and dragged on for days), it could be food and/or fuel shortages. It could be rioting in our suburb or street, damaging homes and vehicles. It could be a strike.

The next list is a list of things we would need to do to prepare to live through each disaster. For example in the case of bush fire, we might need to evacuate. We'd need bug out bags. So bug out bags are on the list, with a sub-list of what should be in them for each family member, and where they are stored so we can get them quickly in a crisis. You can get pretty much everything you need in your BOB from your home. If there's something missing, you'll most likely find it at a $2 shop or a garage sale if you're allowed to hold and visit garage sales. These bags don't need to cost a fortune, they just need to be ready to grab and go. We have used them before, when we were living in the country and we had to evacuate into town.

What would you need if  you had to stay at home during a crisis. Silly question for most Victorians, we already know what we need. But what about the rest of you? Or our international members?

Water was raised over on Cheapskates Chatter (that's our FB group, if you haven’t joined us, we'd love to have you). Yes you can store tap water, for up to six months. Use very, very clean bottles and if you can, buy new lids for them. You'll find lids anywhere that sells beer making or wine making supplies and they are not expensive. I reuse the gingerbeer bottles time after time, but always put a new lid on - they cost around 20c each.

If you're storing water, try to find somewhere other than the shed or garage. I have some on the floor of my wardrobe, and more in the laundry cupboard. The suggested minimum is 5 litres of potable (suitable for drinking) water per person per day. This is enough for drinking, cooking and basic hygiene. Up it to 10 litres per person per day to cover cleaning and a bucket bath. That's per person - so for our household of five, I need to store 75 litres for a three day minimum of water. Sounds a lot, but it's not really. Unless you're using 600ml bottles - then you'll have a few!

Think seriously about shelf-stable ingredients in your pantry. This means if the power goes out you won't lose a lot, but also, if you do need to physically evacuate, you can take it with you. Think dehydrated foods if you're on foot. Tins and jars if you are driving.

One of the most prepared families I heard of during last summer's bushfires was able to leave 20 minutes after being told to evacuate. They had both vehicles full of fuel. Their camper trailer was packed with food, clothes and water. They had their important papers and valuables, in a bag, by the door, ready to grab and go. The kids car seats were in the car. Phone chargers and spare cables were in the cars. This young couple even had a set of hand held UHF radios in case they couldn't use their phones. We have a couple of sets of these, about $70 a set from JB HiFi when we bought them. We use them when we're camping and 4wding and they really are handy. The pet cages were at the door. The pet food and bowls were packed in the camper. The fridge and freezer in the kitchen were almost empty, they were prepared to evacuate.

When the evacuation order came, they put the pets in the cages and into the back of the car. Next they emptied the fridge and freezer into an esky. All the windows were shut tight, and blinds drawn. The bag with the valuables was put into the car. Then kids were buckled into their seats. Last things they did was lock the front and back doors and then turn the power off at the meter box. They did this in case of surges that might cause a short and a fire inside the house.

Within 20 minutes they were on their way to safety. And when they arrived, they were self-sufficient, with a home, food, water, and could care for their babies and their pets.

The family was prepared. And their home was saved due to the efforts of some amazing volunteer fire fighters.

I'm not suggesting you need to go to these extremes, although if you live in bushfire or cyclone zones having an evacuation plan and practicing it isn't a bad idea.

Another area where we need to be prepared is money. Oh boy, what a can of worms this can be. But please believe me when I say you need a cash reserve in the bank. If you don't have any savings, start saving now. If that means you need to give up something, then do it. It's not forever.

When I talk about emergency funds, I speak about starting with one pay period. Then building to three months, six months then ultimately twelve months of all your living expenses saved just for emergencies. Right now unemployment in Australia is rising, and in Victoria it is expected to beat the national figure. Sure, we live in a country with an amazing social security system, but honestly folks we should not be relying on it. We need to be self-reliant and self-sufficient as much as possible.

Saving cash can be really hard, especially if you have a family and a mortgage or you're on a low income. But it can be done - we are perfect examples of that. It isn't easy, but it is simple. You just cut out anything that isn't absolutely necessary to maintain life until you have your emergency fund built to whatever level you think works best for you. We have worked and saved and scrimped and put away and gone without to build up our emergency fund, and we have used it a couple of times over the years. Then we've had to rebuild, but at least while we were working on other things we didn’t have to worry about food, or housing or paying the bills or even birthdays and Christmas.

I am suggesting that it's much better and far less stressful to do a little preparation now, so that if you do face a disaster, you can. Without the stress and worry of being able to live day-to-day.

If you are feeling anxious, or stressed, or worried, take half an hour to make a plan for dealing with disasters. Once you have a plan, the stress will ease, the anxiety will ease.

And as you become better prepared, because remember it will take time (unless you win lotto), you can release that anxiety and focus on other things.
Copyright ©2001 - 2023 The Cheapskates Club, All Rights Reserved