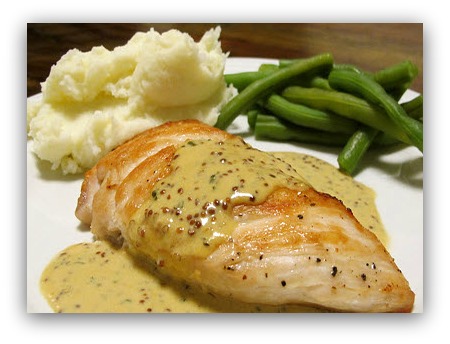 For a long time I wasted an awful lot of money buying jars of sauce. If I felt like "chicken tonight" I'd just stop off at the supermarket on my way home and pick up a jar of sweet'n'sour sauce or honey mustard sauce or cacciatore sauce and some chicken and we would have Chicken Tonight. Just like the ad said, it was easy as cooking the chicken and dumping the jar of sauce over the top.

Never in my wildest dreams did I think that I could make a sweet'n'sour sauce or something as exotic as a honey mustard sauce. They would be way to complicated and time consuming. The jar was the best way to go.

I am a child of the 70's when  the marketing gurus were really pushing convenience.  No one made their own sauces any more. It was much more sophisticated and modern to use jars. Cooking from scratch was old fashioned and denied women their freedom or some such nonsense. I was a thoroughly modern wife and wanted to stay that way. I know, I should have known better. But I didn't. I believed the ads.

And then Disaster Struck and I had to figure out how we could maintain our lifestyle on no income and without going without the things we liked.

Out came the recipe books and I was gobsmacked - and that doesn't happen too often - at just how simple those rather expensive jars of sauce were to make. And how easy it was to make a version that left the jars for dead.

I was thinking of this as I cooked dinner tonight. Another menu plan deviation, but I felt like "chicken tonight". Honey mustard to be exact, with hassle back potatoes, green beans and roasted corn cobettes.  I was thinking how easy it is to make a really delicious honey mustard sauce and just how much cheaper it is than buying a jar, about $2 cheaper all up. That's a lot of money, even if you only used one jar a week. $104 a year, around a week's grocery money, gone on just jarred sauce.

My honey mustard sauce is delicious, much nicer than any bought version we have tried and it takes around 3 minutes to make.  Sometimes it would take me that long to get the jar open!

The recipes for my version of honey mustard chicken and sweet'n'sour sauce are in the Recipe File.

So what homemade versions of "jar" sauces do you have?
​Platinum members can login for full access to the Member's Centre.

Not a Platinum Cheapskates Club Member?