How We Live a Greener Life on a Tight Budget 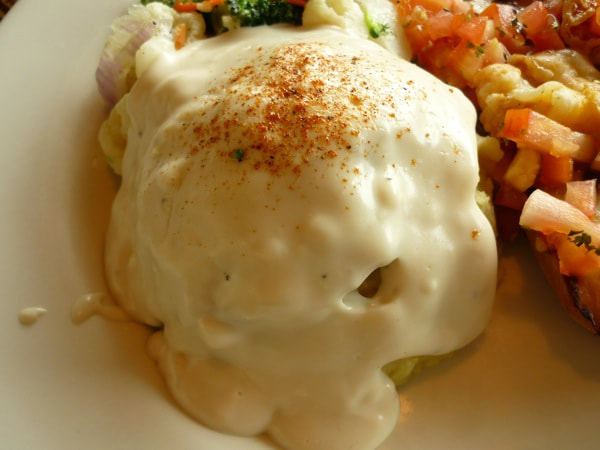 When Disaster Struck and I had to come to terms with living on no income we become a much greener household, although it was almost by default rather than any deliberate actions on our part.

Going green was a side benefit. My first priority back then was stretching every dollar we had until it screamed, and then some, just to pay the bills and feed the boys. It was that stretching that changed the way I looked at the way we were living.

Things were tight. Very tight. I had $200 a month ($46 a week) for housekeeping money. That was our groceries, medicines, baby needs, Playgroup fees and anything else we needed that wasn't a regular bill. I budgeted $5 a week for gas, $3 a week for electricity and just $1 a week for water (if only I could budget those amounts today!). We didn't make phone calls. I only drove the car twice a week. We didn't eat out, buy new clothes, have haircuts, go to the movies - we couldn't afford to. 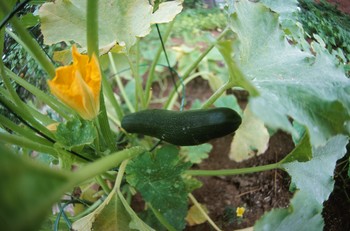 That's when I started Cheapskating. I needed every dollar we had to do the job of at least three, preferably four. I stretched them till they screamed, and then kept stretching. I became very inventive, learning to reuse, recycle, redo. I learned to cook, properly, from scratch with individual ingredients, not packets. I learned to grow food we could actually eat. I honed my sewing skills. I even learned to cut hair. I learned that washing plastic bags meant I could use them over and over. I learned than plain laundry soap and a soak in hot water lifted stains just as well as Napisan, but cost a whole lot less.

I learned to do a lot of things I never thought I would ever do.

As it turned out, so many of the things we did (and still do) to reduce our cost of living were very "green".  Things like hanging the washing out to dry. It's a no-brainer here in Australia but there are still a lot of people who automatically take the wet washing from the machine straight into the dryer. We have a wonderful climate so why not take advantage of it? If hanging washing on the line is too difficult, move the clotheshorses out onto the lawn or balcony and hang it over them. It will still dry. 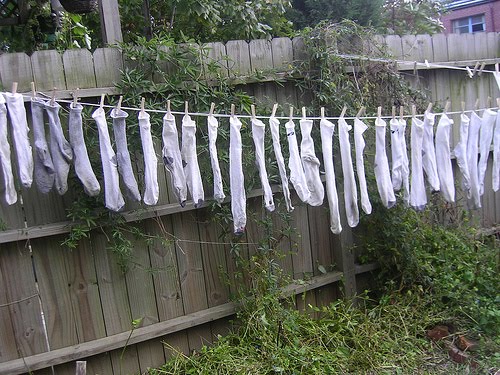 I didn't have a dryer, I had clotheshorses, and lots of them (bought for $4 each from Crazy Clints and I'm still using them). My brother called in one afternoon and after a cuppa and a snack, he said he was going out for a little while, but would be back for dinner. As he was working, I just assumed he had work to do.

He was back in a little while, with a clothes dryer. Bless him, he thought I needed a  dryer. He saw the clotheshorses all over the house, covered in wet clothes, nappies and towels and bought me a dryer. What he didn't realise was that we didn't have a dryer because we simply didn't have the money to pay for the running. I found out that dryers make the best storage spaces. I stash all sorts of things in the dryer; it's dry, dark and out of the way, great for hiding presents that need to be hidden.

You do have clotheshorses don't you? There are five in our house. One in each bedroom, over the heater vent. And one in the familyroom, over the heater vent. They actually save me a lot of time, as well as money, especially in winter. I just hang everyone's wet washing over their clotheshorse each morning. The washing dries overnight and then everyone puts it away the next morning. Or in the case of the boys, they take the clean stuff off and put it on!  Either way it works.

The tea towels and dishcloths and other "general" stuff are hung over the clotheshorse in the familyroom. It's a very green system - it recycles the warm air from the heater to dry the clothes, and the wet washing acts as a humidifier in the rooms so the air doesn't become too dry and horrible. I figure if I'm going to run the heater anyway we may as well get our money's worth from it.

In my quest to stretch our money I looked for ways to heat or cool the house without spending anything. When reaching double digits in winter was a warm day and 40 degrees was a mild summer day, simple tips like making sure that draft-stoppers were against all exterior doors and most of the windows were tightly shut keep heat in the house in winter (and out in summer) reduced the need to run the heater as long. I still do those things and it cuts around $35 from our heating bill, reduces the amount of gas we use and it is a teensy, tiny green thing to do. 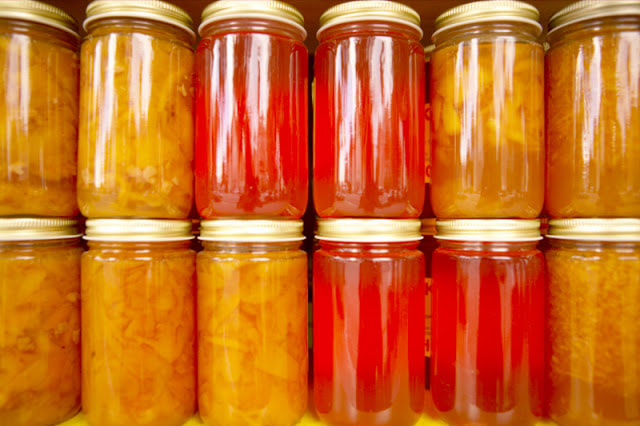 I also switched to using cloth serviettes. If I'm being honest that was just because I prefer cloth napkins; paper tears to easily. But it stopped me buying a packet every other week or so. I also switched to hankies instead of tissues (unless someone has a very bad head cold, then I give in and supply a box of tissues). Apart from the cost savings, and the teensy, tiny greening of our household it also means I never, ever have tissues through the wash anymore! Now that is a real bonus :)

We switched to compact fluorescents as soon as we could. I'm still not convinced they save us any real money but when it comes to being a green Cheapskate every little bit helps. Although the jury is still out on the green benefits as the mercury they contain is downright dangerous in landfill, they are another teensy, tiny way we greened our household.

There are lots of other things I do to save money that help us lead a greener lifestyle.

We use table lamps of an evening for reading, knitting and watching TV, using one light bulb instead of the six in the ceiling lights. And when we leave a room we turn the lights off. 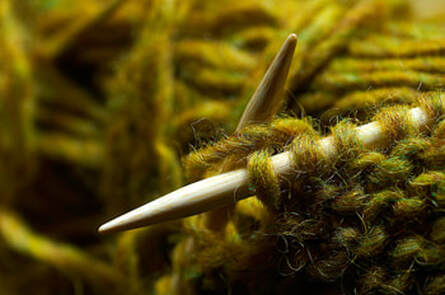 It took a while but I've finally trained everyone to turn appliances off at the wall and unplug them. The only time it's a problem is first thing in the morning, before I'm fully awake. You have no idea how many times I've hit the button on the kettle and wondered why it hasn't boiled. It always does once it's turned on at the wall - go figure!  But it saves us a little money and helps us to be a teensy, tiny bit greener.

I re-use baking paper over and over. I wash and re-use foil, Clingwrap and plastic bags too, so much so that I lashed out and bought one of those hanging mini clotheslines to dry them on. If you wander into my kitchen you'll see it hanging from a hook in the corner of the ceiling and it will most likely have plastic bags, foil, empty cereal bags and Clingwrap hanging on it along with bunches of herbs to dry.

By now just about everyone uses green bags to carry their shopping home. But do you say no to plastic bags for your fruit and veg? I've been using MOO veggie bags for years now.

The idea of not adding to landfill if I can possibly help it really appeals to me and saying no to plastic bags is one way of reducing the impact my family has on the environment. It saves us money too. Fruit and veg kept in those bags tends to sweat and go off much faster. I'm happy to see the produce I buy go furry in a reasonable time, but not overnight, so I use gel bags and Tupperware containers to store our produce in the fridge. They are both re-usable.

Of course with our garden we compost as much as possible. I have a bucket with a lid that sits on the kitchen bench and all food scraps, small bits of paper and the vacuum dust bunnies go into it. When it gets full, which is just about every day, it gets emptied into the Bokashi bucket to make compost. This has really helped reduce the amount of rubbish in the bin too. If you don't have a Bokashi build a compost pile. You don't need anything fancy, just get started. Your garden will thrive, the soil will be rich and full of worms and witchity grubs and other good bugs and you'll be living a slightly greener life. 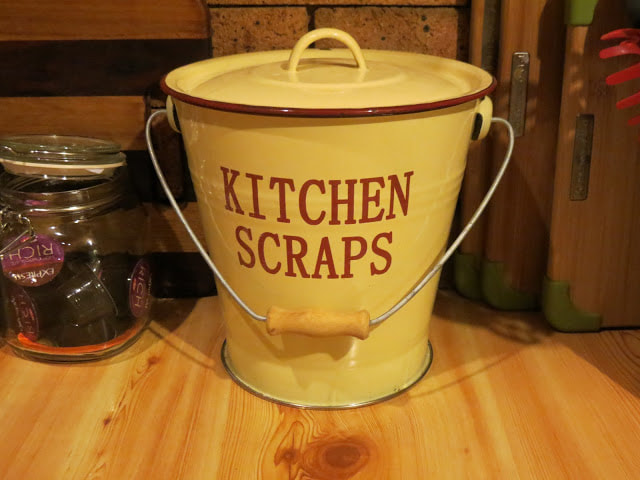 Instead of being the politically correct thing to do, when Disaster Struck recycling became a necessity and now it's something I actually enjoy. It became a challenge, one I'm still facing. Just once I'd like to have an empty recycle bin on garbage day because we've found ways to re-use and re-cycle everything that would normally go into it. It's a work in progress, some fortnights there's not much in the bin at all but it's still not empty.  One day we'll get there, I keep on trying.

Every day I see changes we can make to not only save money, but to live a more sustainable life. There's so much more we can do, and we will - one thing at a time.

Every day we become better stewards of our money and of our environment, living a greener life on a tight budget, and happily too.
Copyright ©2001 - 2022 THE CHEAPSKATES CLUB, All Rights Reserved