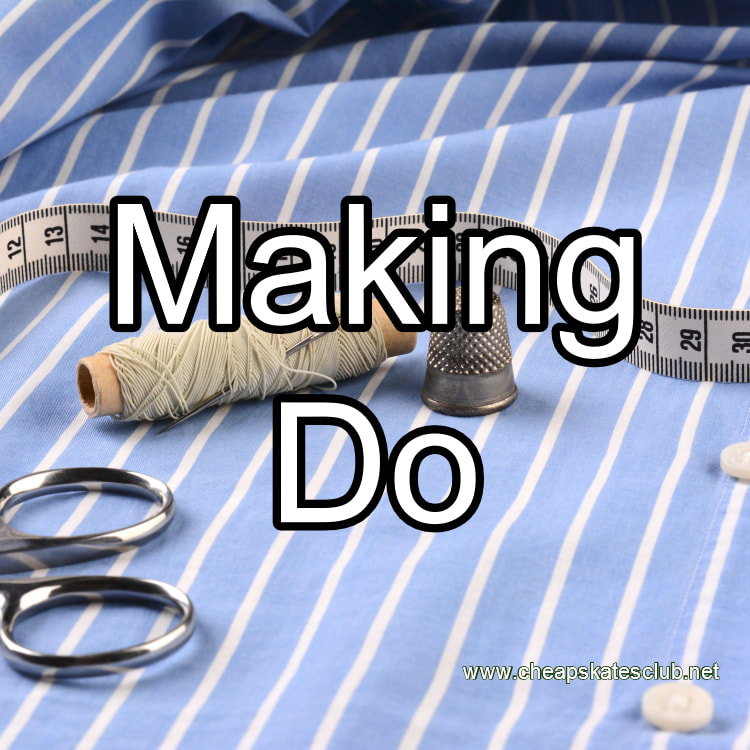 There's an old saying, one I learned from my parents that we use often in our house "Use it up, wear it out, make it do, or do without."

I've always admired the ingenuity of Australians and our ability to make something from nothing or, to quote John Williamson, "tie it upwith wire, just to keep the show on the road?" Many the time a length of baler twine has been used to tie up tomato plants, wrap a parcel, actas a handle, transform into a latch to keep agate shut on a paddock full of sheep or cows. I've even made do with a length of baler twine to tie the covers on a pudding basin so we could steam the Christmas pudding.

We made do with what we had and it worked. Clive Robertson, host of Weekend Afternoonson Sydney's 2UE, has become a fan of making do. He didn't consciously plan to live the "making do" lifestyle; it was something that just happened. Now when he needs a particular item, he looks around at what he already has, and makes do. And he tells me he's saving bucket loads of cash!

The dictionary defines make do as "the ability tomanage to get along with the means available"and that is something that we should all aspire to, not only to save money (and it will) and our environment, but to preserve skills that will be lost to future generations of Australians. We see all too often the result of a disposable society: cluttered landfill, huge personal debt and a consumer mentality of if it's broken, throw it outand get a new one.

My husband's grandmother was the best make-doer I have ever known. Granny Armstrong never bought or borrowed anything unless she absolutely had nothing else that would make do. I have known her to turn a paper bag into a sun visor rather than buy a new hat or a pair of sunglasses (OK, that's taking making do to extremes but it did the job, she didn't buy something she didn't need and she was happy).

Basic life skills are being lost all because we don't make do with what we have. It can take a little imagination, and perhaps we are losing that with too much TV time, but next time you need a scourer in the kitchen how about rolling up the plastic bag the onions came in and using that? It works really well. Run out of shampoo? Try washing your hair with soap and rinsing with white vinegar - it will be so clean, shiny and soft you may never go back to shampoo and conditioner.

Need a marinade for some meat? Add a little vinegar, oil and garlic to that almost empty bottle of bbq sauce, shake it up and pour it over the meat. You've used up all the sauce (waste not, want not) and not had to buy a marinade (saved about $3). Let the meat rest in the fridgefor at least two hours and use the marinade as a baste when cooking.

Before buying new sheets, think about what you have: are they really beyond use or do they just need to be turned? Turning sheets is one of those almost lost skills, but if you turn your sheets and make do another year or two, how much interest will you save on your debt?

Making do doesn't have to mean you are deprived of the things you enjoy. In fact if you become a champion make-doer you may find you have more money and time to spend on those things, without affecting your budget at all.
Copyright ©2001 - 2022 THE CHEAPSKATES CLUB, All Rights Reserved