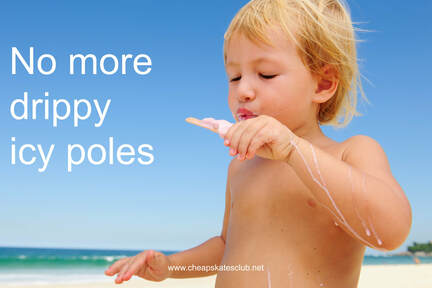 ​Warmer weather means ice blocks, and every mother knows that ice blocks mean drips, sticky fingers and stains on t-shirts as well as frozen little fingers.  Don't stop the ice blocks, make up some insulated holders instead, just as Cheapskater Rose has.

"My partner works in event management and is constantly bringing home promotional stuff - pens, notepads etc.  We have quite a few stubby holders lying around the house too and as we don't drink beer they were just collecting dust and taking up space in the laundry cupboard. During the last few weeks when it has been so hot our pre-schoolers have been devouring icy poles almost non-stop (I make them from water and fruit juice) but their little fingers were melting them faster than they could eat them and they were making an awful mess. I remembered an icy pole holder I had seen at a kitchenware shop - it was made out of the same foam as the stubby holders! It was easy to take a couple from the pile in the laundry and with a pair of scissors and a glue gun (you could use needle and thread) I made two icy pole holders in no time at all.

Here's how to do it:
Cut the bottom circle out of the holder.
Push the holder together so you have a fold and the seam.
Cut the holder in half along the seam and again along the fold so you have two pieces.
Run a line of hot glue down the inside of one long edge, fold the other edge over to make a circle.
Repeat with the other piece.

You now have two icy pole holders. As they are insulated the icy poles don't melt as quickly and little fingers don't get too cold. They are also good for catching drips and can be re-used over and over and even washed when they get sticky."
Cheapskates Club members can login for full access to the ​
Cheapskates Club Recipe File

​​Not a Cheapskates Club Member?

Please upgrade to a Cheapskates Club membership to be able to access our Member's Centre.