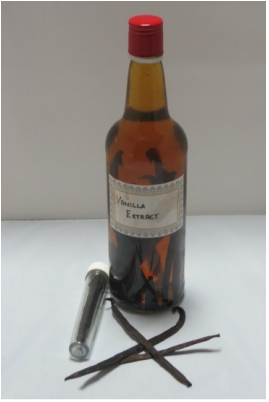 Making vanilla essence is easy. There is a step-by-step on how to MOO vanilla here. But if you're out of vanilla extract and don't want to wait six weeks for your MOO version to mature, or you don't want to use it because of the cost or the alcohol content, turn to one of these vanilla extract substitutes, most of them are already in your pantry.

Maple syrup - Replace the vanilla with an equal amount of maple syrup. Any changes in flavour will be subtle. Aldi sell pure maple syrup so don't feel the need to but the fake stuff.

Vanilla flavoured milk - Have vanilla-flavoured almond or soy milk in the fridge? Use it to replace the vanilla measure for measure.

Rum or brandy - If you aren't trying to avoid the alcohol, try an equal amount of rum or brandy.

Vanilla bean - Scrape out the seeds from half of a vanilla bean, and use them as a stand in for one tablespoon of vanilla extract. I buy vanilla beans online for a fraction of the price of two from the supermarket.

Vanilla paste - Replace the vanilla extract with an equal amount of vanilla paste. This is a rather costly substitute but if you really need that vanilla flavour it works.

Which Substitute Should You Use?
If you have more than one of these substitutes on hand, choose the one that seems to be the best flavour match for the recipe that you're making.

If you don't have any of these things on hand, simply leave the vanilla out and continue on with your recipe. As long as vanilla isn't a star ingredient, there shouldn't be much difference in taste.

Learn how to make your own vanilla extract, so you never run out again.