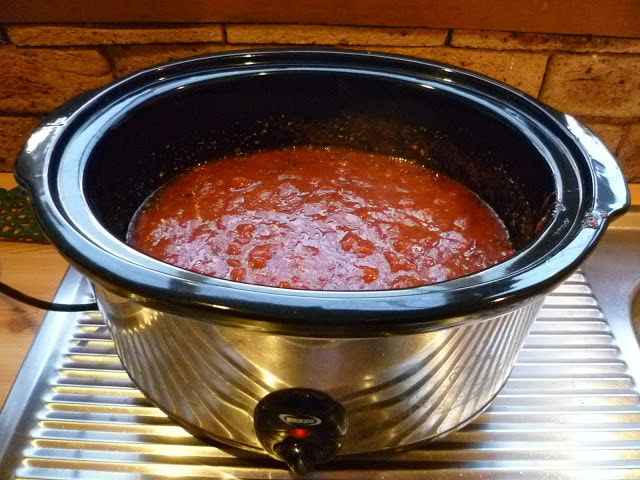 I've been making pasta sauce for the last week. I've had a batch in the slow cooker every day and night, there was even a batch cooking during our card making day. So far I've bagged 49 two-cup packages of pasta sauce, almost enough to last us a year. And, because I've been using my own home grown tomatoes, that 36 litres of pasta sauce has cost under $8.

Method:
Heat the oil in the bottom of the crock pot and sauté the garlic until it is golden.  Add the tomatoes, basil and oregano and stir. Put the lid on and cook on HIGH for 8 - 10 hours**. Stir. If the sauce is thick and rich, it is done. If not cook for another 30 minutes and stir again.  Let the sauce cool. Use a stick blender or food processor to puree the sauce.  Portion it into sterilised, saved jars, freezer containers or zip lock bags and freeze.***

This makes the equivalent of 4 jars of commercial pasta sauce.  The cooking time will depend solely on your slow cooker. Newer slow cookers are actually very fast compared to the original models, so watch your sauce and when it reaches the consistency you like it's ready.

I use this sauce as the base for other pasta sauces, adding additional seasonings depending on the recipe. It also makes a lovely pizza sauce and is delicious with just a sprinkling of mozzarella and grated parmesan cheese.

Notes:
*Tomatoes - I use our home grown tomatoes so I know they are pesticide free (or as close to as I can get, I don't use chemicals on my garden) so I don't peel the tomatoes. I wash them then chop them roughly and cook them down. The skins are then softened during cooking and disappear once the sauce has been pureed.

**Cooking time will depend on the tomatoes - sometimes they are really juicy, sometimes not - and your slow cooker. Modern slow cookers actually cook a little faster than the older models. When the tomatoes have cooked down and the sauce is thick enough to stick to your spoon it is done.

***Storing: I bag in two cup lots in ziplock bags and freeze. You can bottle the sauce  and process in a hot water bath if you prefer shelf safe storage.
Platinum members can login for full access to the Recipe File